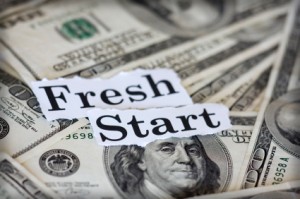 This year marks the seventh year since the influx in bankruptcy declarations in 2010, therefore millions of Americans will see bankruptcies begin to fall off their credit report.

Over the next five years, about 6 million Americans will have their bankruptcies disappear, possibly sending a flood of more homebuyers into the housing market, according to an article by AnnaMaria Andriotis for The Wall Street Journal.

In 2010, the number of Chapter 7 bankruptcies, the most common type of bankruptcies which do not involve a plan of repayment and instead liquidate the filer’s assets, increased to nearly 1.14 million. Of those, nonbusiness Chapter 7 filings made up about 1.1 million, according to the U.S. Bankruptcy Courts.

For comparison, the number of Chapter 7 bankruptcy filings among non-businesses in 2007 totaled just more than 500,000, data from the U.S. Courts showed.

After hitting the peak in 2010, bankruptcies once again began to slowly decrease. In 2016, Chapter 7 non-business bankruptcies slipped to 473,673 filings.

Now, seven years later, these bankruptcies will begin to fall off, improving the credit score for millions of Americans, and enabling them to once again consider homeownership.

Credit scores reached a record high this Spring and the share of Americans in the riskiest borrower category hit an all-time low, according to the WSJ article. As bankruptcies continue to fall off credit reports, credit scores will continue to improve, and more consumers could begin to enter the housing market.

This will create even more competition in an already tight market. Home prices continue to increase as inventory levels drop. And experts say don’t expect it to let up anytime soon.

And Hispanic homeownership could also see an increase over the next few years as President Donald Trump and his administration seek to “dismantle” the Dodd-Frank Wall Street Reform Act, which could give lenders more freedom to originate loans outside traditional qualified mortgages. They could then, perhaps, extend more lines of credit to the Hispanic population.

And don’t forget first-time homebuyers. The most recent report from Ellie Mae shows where there is available inventory, Millennials are ready and willing to buy a home.

Overall, homeownership rates could boom over the next few years. That is, if struggling inventory levels can keep up.

From a recent article in housing wire.com

Please provide your name and email