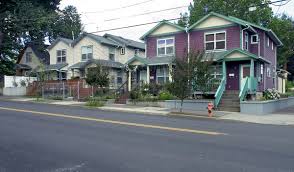 Oregon is joining a growing movement to loosen up single-family zoning laws in order to ramp up homebuilding. While several cities have passed similar bills, Oregon could be the first to offer state-level legislation.

Oregon’s House and Senate have passed a measure to require cities with more than 10,000 people to allow duplexes in areas that have been zoned only for single-family homes. In Portland, cities and counties are required to also allow the building of quadplexes and “cottage clusters” of homes around a common yard. The state’s governor is expected to sign the bipartisan bill.

“We all know we have a housing crisis,” Oregon House Speaker Tina Kotek said in February. “We need multiple tools. One of them is to smooth and encourage additional construction.”

A single-family home may be too pricey for some families, but duplexes and townhomes may offer greater affordability.

“Every lot that is developed in the city that might be well-suited for townhomes or a duplex or a triplex that is instead developed this year with a single-family home—that was a missed opportunity,” Rep. Julie Fahey, who worked with Kotek on the bill, told Oregon Public Broadcasting.

In December, the Minneapolis city council voted to eliminate single-family zoning and allow duplexes and triplexes throughout the city. California recently considered a bill that would allow quadplexes in neighborhoods zoned for single-family housing and more density near transit, although the bill has been tabled until January 2020.

But critics say that lifting single-family zoning rules won’t necessarily open the door to greater construction. Builders have cited rising labor and lot costs as barriers that are making it more difficult to build lower-priced homes. Also, common objections to the increase in density says that relaxing single-family zoning laws would “destroy neighborhoods.”

Potential home buyers are seeking lower-priced homes, but Laura Wood, a Portland real estate professional, told Oregon Public Broadcasting that, “I have a lot of first-time home buyers, and they all want exactly what I want. They want a house in a neighborhood.”